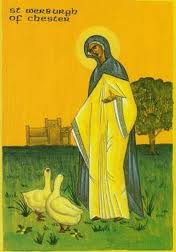 The Two Saints Way is a new 92 mile pilgrimage route which has been recreated between the cathedral cities of Chester and Lichfield.

The website not only gives detailed descriptions of the walk itself and the many interesting things you can see along the way, but describes how the walk was developed.

The footpath is called the Two Saints Way after two Saxon saints who brought Christianity to the ancient kingdom of Mercia in the seventh century. The shrines of St Chad at Lichfield and St Werburgh at Chester were popular destinations for pilgrims in medieval times. The discovery of the Staffordshire Hoard near Lichfield in 2009 has increased interest in Mercian heritage and walking the Two Saints Way provides an ideal opportunity to learn more about this fascinating period of history. Items from the hoard can be viewed at the Potteries Museum in Stoke which is directly on the route.  http://twosaintsway.org.uk/